Since 2005, the French NGO Dessine l’Espoir (Designing Hope) has led a number of creative initiatives through the UNESCO-sponsored “I Love You, Positive or Negative” campaign, aimed at reducing HIV stigma. Like Quebec’s COCQ-SIDA, Designing Hope ties its graphic images by contemporary artists to anti-stigma testimonials from local personalities and to opportunities to initiate dialogue with affected communities. They work predominantly with African communities in France, with children and families in Romania, and in African countries including Burkina Faso, Swaziland, South Africa and Zimbabwe.

In 2011, South African Nicolaas Maritz won Designing Hope’s poster competition. Maritz describes the need to speak to a broad spectrum of people: “With more than 11 languages spoken and as many tribes of different ethnic origins, the word ‘diverse’ doesn’t even cover it.” Hence, his simple and unintimidating message: “Love the One You’re With, Positive or Negative.” 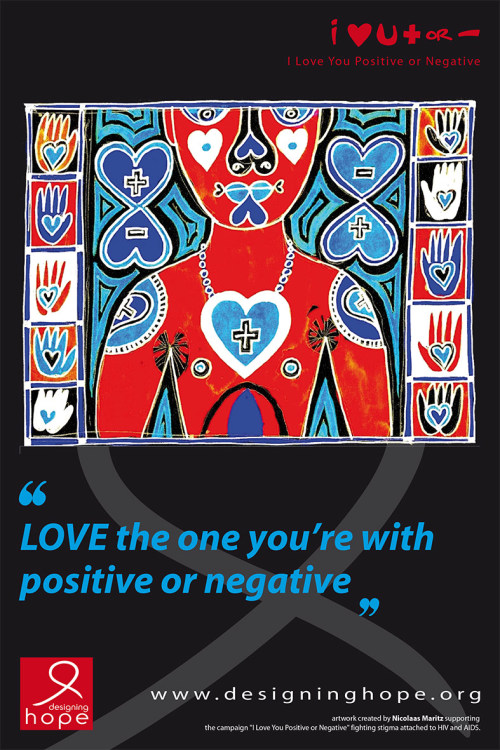 In an effort to reach out to women, Maritz used colourful visuals inspired by the fabric prints worn by many South African women as well as some men. His vibrant style has been called “ethno-centric punk” for its mixture of traditional, tribal and modern design. Maritz was happy to have his work associated with Designing Hope’s anti-stigma work: “It’s wonderful when you create something that assists in making change.” In addition to posters, his work was featured on condom packages, stickers and tote bags.

Throughout the epidemic and across cultures, posters have played an important role in promoting AIDS awareness and in combatting stigma against people with HIV. Highly politicized messages and graphic images characterized the early response to the AIDS crisis in North America. More than a decade of political activism produced great changes. AIDS generally became less of a guerrilla battleground and more of a scene of aftercare and reintegration. HIV campaigns reflected this new reality, promoting services and HIV awareness. The poster, cheap and locally reproducible, has proven to be highly adaptable and accessible in these changing contexts. In recent years, the poster has forged an important alliance with social media, assuring its continued relevance in years to come.