In collaboration with French association “Les Grandes Personnes”, several workshops have been financed by Designing Hope to train volunteers from Fundzisa Live’s support group in the making of giant puppets to be used in HIV AIDS awareness plays in rural areas. This is also an income generating activities for the women involved.

The aim was to train volunteers from Funnziza Live’s support group in the making of giant pupets to convay Design hope’s messages in HIV AIDS awareness plays in rural areas.
20 volunteers took part to this training, according to their availibility, skills.

“Doctor Thembo’s advices”, a collection of 3 awareness comics edited in 2010 by Designing Hope, have been used as an inspiration source for the characters of the puppets and scenarios of the plays.

After a first step of sketches and scale models, 4 giants puppets, and several accessories have been entirely built by the members of the group, using recycling materials such as plastic bottles, newspapers (for papier maché covering faces) and PVC tubes…

Costumes were also sewn by women from the support group who received a specific training in July 2010 (cf School uniform sewing project).

SETTING UP A SHOW WITH THE GIANT PUPPETS

Scenarios were created following the objectives of prevention campaigns led with the Red Cross: testing, use of the condoms, the role of the traditional doctors and the consellors.

Besides the learning of the manipulation of the huge puppets, the members of the group had of to learn their role in the play, and comply with rehearsals, what was an unusual exercise for them.
Each role has been learned by two different people in order to have more versatility during the tour of the show.

AN UNFORGETTABLE PERORMANCE IN PIGGS PEAK

At the end of the training, a parade of puppets and a first performance of the giant puppets was given in the center of Piggs Peak.
This was perceived as an exceptional event for the most of people. The show has been performed several times on the 1st december for the world AIDS day, at PiggsPeak’s Prison and also for the youth audience, on occasion of events organised by the municipality.

The show is now also performed during the outreach sessions in Piggs Peak district.

This workshop allowed to train new persons to new techniques: molding, papier mâché, sculpture and painting, practise some sewing, construction of mechanisms for the manipulation of puppets…
Moreover, it is also a source of income for the group that is asked to do shows at various events. 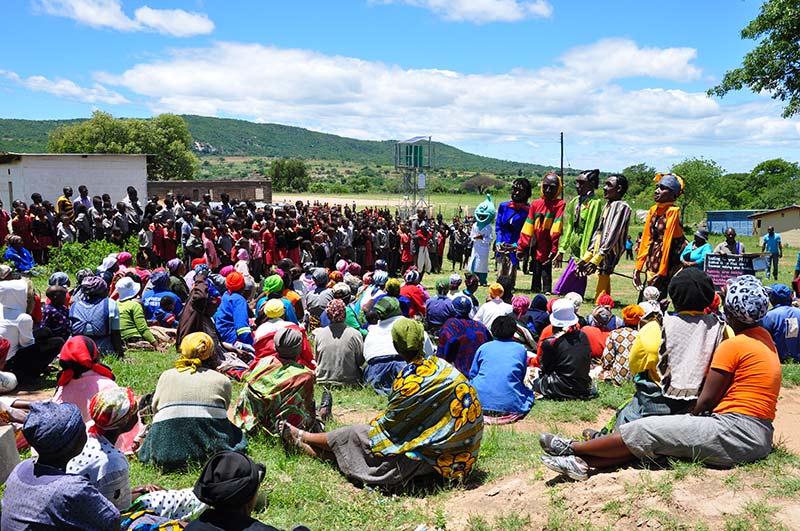